Griffintown is a community with many faces and memories. Once the site of one of Montreal’s largest Irish populations, years of poor urban planning and public policy have left the area in a state of limbo. Griffintown has seen the booms and the busts of industrialization. Today, the inhabitants of the area just west of Old Montreal have made strides to stop a large development program that would raze most of the neighborhood.

This website will examine Griffintown as an example of working class memory within Montreal. Why is there such a connection to an area that has had its churches, schools and community centers bulldozed for the sake of parking lots, highways and warehouses? While a handful of citizens have remained from Griffintown’s heyday where churches, schools and community resilience were part of daily life, many have moved into other regions of Montreal. However, for those that have stayed, those that have moved on and for those few that have found a new place in Griffintown, it remains a place of signifigance and memory. 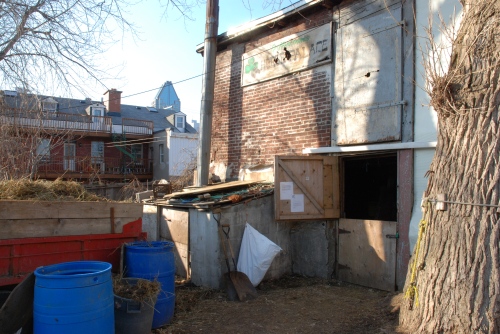 The Griffintown Horse Palace is an institution within the Neighborhood. 1000 de la Gauchetiere can be seen in the distance. Photo by Aymeric Grail, 2009